…but I know when I like something, and I want to find more of what I like so I recently decided that I would try out a new restaurant, coffee shop, bar, sandwich shop, etc every week. Or maybe I will try more than one a week if I am so inclined…careful, might get a little crazy over here in Boston.

Today I began my quest for the discovery of yummy food. I started in the North End with Bread and Butter Cafe & Bakery. I have gotten coffee here a few times and am a fan but I have never gotten anything to eat. A coworker of mine was raving about the breakfast sandwich and since breakfast is by far my favorite meal, I decided it was high time I try this sandwich, especially since I had been eyeing it for a few months.

Description: Egg soufflé with cheddar, arugula and red pepper spread on a brioche roll for $3.95 with the option to add bacon, sausage or ham for an extra $2.00. 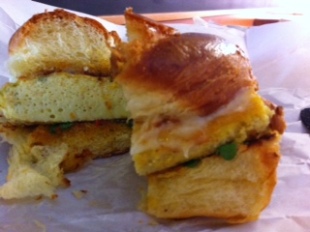 This is quite a fancy sandwich in description and looks and since the Cafe has a kind of modern elegance that many Cafe’s in the North End do not have, it makes sense they would need to make a sandwich above and beyond the rest. The egg soufflé being “light and fluffy” kind of drew me in. It reminds me of a royalty above the classic egg, cheese and maybe bacon sandwich on a bagel or English muffin, toast etc.

So down to the nitty gritty…

I didn’t get any meat on it because I believe the true test of a good sandwich is found in its basic list of ingredients, without add ons because when you really think about, EVERYTHING tastes better with bacon. It is a decent sandwich but I was a bit overwhelmed and distracted by the flavor and texture of the brioche roll. Now don’t get me wrong, I LOVE brioche, that’s not the issue. I used to eat it alone or with a little bit of jelly. It’s flaky, buttery texture and consistency makes it a deliciously tantalizing item for my little taste buds. But to use brioche for an egg sandwich without making the ingredients of the sandwich even more tastebud tantalizing is just wrong. The brioche took away from the flavor of the egg and red pepper spread which didn’t even extend to the edges of the roll…huge pet peeve. I could barely taste the red pepper spread and the arugula was non existent – I think there were two pieces.

I cut my sandwich in half so that I could try both sides to see if there was any taste distribution issues, as in if they didn’t evenly distribute the ingredients but no such thing existed. So that’s a plus. What is not a plus is that it was just lacking any flavor at all. I couldn’t get past the brioche roll. It just completely overpowered the sandwich. I decided I would try the soufflé alone and sure enough it was lacking in flavor which leads me to believe that if this were on any other type of bread, it still wouldn’t be that great.

The red pepper spread alone was pretty good. I took a bite of just the bottom of the sandwich where the spread was but I was still overwhelmed by the brioche. The bottom piece wasn’t the size of the top piece after cutting so it was one of those situations where the sandwich fell backwards when it was put down. Another pet peeve. The soufflé was just too thick which caused the sandwich to fall apart and the cheddar cheese seemed to be non-existent which tends to help hold the sandwich together. A really good breakfast sandwich sticks together because of all the cheese holding it together. 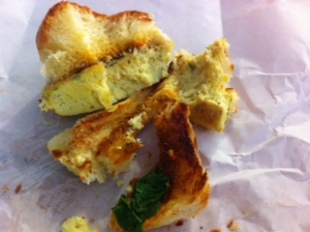 All in all it lacked the flavor profile I would have expected from it’s description. I left without finishing it and without any desire to save it for later which is unheard of with me. I always finish my food at some point in time! Instead of leaving happy, full and satisfied, I left slightly disappointed with a buttery film on my teeth. I went and brushed my teeth before finishing my coffee…now that’s just weird.

A few positives: it’s not that expensive, it will fill you up, there are worse sandwiches out there.