Today was the first day I had the balls to actually leave Orvieto. I didn’t even want to but I knew I had to step further outside my comfort zone so I ventured down to the train station, bought my ticket through the automated ticket machine, checked the train platform and schedule and suddenly felt like I was finally getting the hang of this traveling through Italy thing. I wanted to try out some Italian AND wanted to make sure I was, in fact, on the right platform so I turned to two women next to me and attempted to ask, in Italian, which platform was to Arezzo. They were American. There goes my attempt. It was actually really nice that they did speak English after having been around mainly Italians for the past few days. Turns out they were both born in Italy but live in Chicago and California. One of the women’s daughter was getting married in Italy. Hello dream of mine! 🙂

We “snuck” into first class, which had air conditioning (heaven) and chatted about Italy and life. They were headed to Montepulciano and asked me if I wanted to go with them. Since I had made the decision to go to Arezzo (and my host said it was a wonderful city), I stuck to the plan and said goodbye once we hit their stop. I was kicking myself shortly after I got off the train for making that decision. I felt COMPLETELY uncomfortable in Arezzo. It was dirty and the people weren’t as friendly and it was a much bigger city than Orvieto. Needless to say I wasn’t ready for it but I stuck it out anyways and explored a little bit of the city.

The only 2 places I actually went into were the archeological museum and the San Domenico church. The church wasn’t extravagant per say but the paintings. Oh my gosh the paintings were AMAZING. Some of them had chipped away over time but the intricacy of them was outstanding. When I enter churches I instantly feel connected. I know it sounds silly but I feel something wonderful in my soul and I love it. How could you not with images like this… 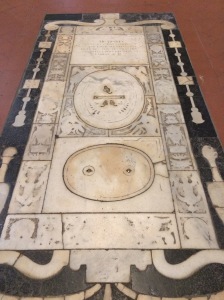 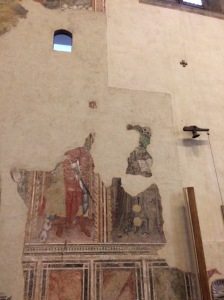 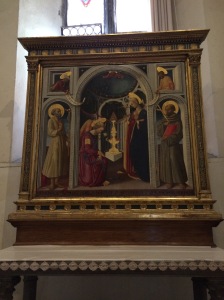 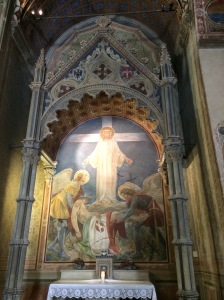 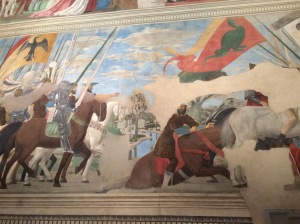 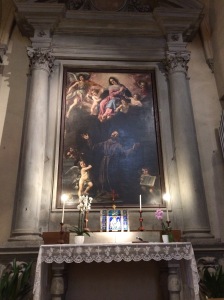 After visiting the church, I walked around for a few hours. Unfortunately I forgot about Siesta and was unable to get inside anything else except the archeological museum. So I walked around a bit and took some photos.

Life is Beautiful was filmed in this square in 1997

As I was sitting at the train station I began to reflect on my day in Arezzo. The number one thing I realized is that it is IMPERATIVE I learn Italian for next year. They make it seem like everyone knows English. THEY (whoever they are) couldn’t be more wrong. Here are some thoughts that I wrote while waiting for the train.

Even though I started out not liking it, I’m happy I came because I learned what not to do as a tourist and it got me out of my comfort zone. Traveling alone makes it easy to hole up and do what is comfortable. Taking my adventure to Arezzo pushed me way out of my comfort zone to the totally unfamiliar. It was kind of how I felt when I first got to Orvieto but at least I knew someone there (my host) and have met a few more people along the way. Feeling lost is a great way to describe it.

Being alone in Italy has challenged me and taken me so far out of my comfort zone that I have had to and wanted to talk to people so that it feels less lonely and scary. It has, as a result made me less shy. I was hesitant to talk to anyone at first but I am getting better. It has been a great learning experience and now I really have no issue going places alone. Back in the U.S. going to a restaurant alone was something I would NEVER do. Now, however, I LOVE it! (You’ll see why in the upcoming posts.)

It’s funny how much traveling alone tests your confidence. I can have all the confidence in the world in the U.S. but being in a new country alone where very few people speak the language in the areas you are in and every sign is in Italian brings a whole new level of necessary confidence. I really had no expectations, had no idea I would feel so lost and kind of be okay with it, knowing that things would work out. When I arrived in Rome I had a panic attack, questioning why I did this, especially alone. But I guess I just had a subconscious faith that it would all work out. And so far, it has.

That afternoon when I got on the Funicular to head back up to Orvieto, I took a HUGE sigh of relief that I had made it through my first day. About a minute after I got on waiting for it to move, my two new American friends that went to Montepulciano got on! I was hesitant to ask how it was for fear they would tell me amazing, which is exactly what they did. I got a little jealous and felt some regret in not going with them but then I reflected back on my train station reflection and reset my thoughts on the matter. I WAS happy I went to Arezzo alone (but still jealous).

So far, my Italian journey was going exactly as planned…there was no plan and that’s what made it perfect. And just a repost because this is my favorite photo.