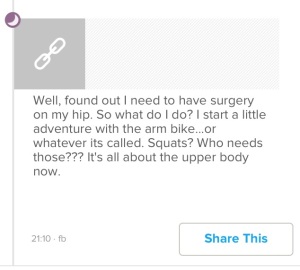 Timehop reminded me today that one year ago I found out that I had to have labral tear surgery. I remember sitting at Children’s Hospital waiting to be called back to meet with the surgeon. He was running late and I was growing agitated because the whole process of getting to this moment of truth was so long and annoying. I was listening to music and writing on my phone (of course), and all of a sudden I hear singing. GREAT, just what I want to be bothered by at that moment. I drew a long breath in and a huge sigh of annoyance until I turned and looked at where that singing was coming from.

If you need an eye opener to help you realize your problems aren’t that bad, for me that my impending news of hip surgery wasn’t that bad, go sit at Children’s and observe. Simply being in the lobby is hard. To look at all the sick kids who still have smiles on their faces. And here I was pissed about surgery on my hip in an otherwise extremely healthy body. It really brings perspective. As I sat somewhere far away from that lobby, I got an even better idea of what goes on and how important that singing is that I heard. The singing was coming from two people dressed as clowns. Their job is to walk around the hospital and make kids (and adults, including myself) not only smile but laugh and laugh loud. After they left, I suddenly felt a lot happier and as I looked around the room, I realized that everyone else also had a bit more joy in their faces.

“So looking at your MRI you do have a labral tear in the anterior portion of your hip and you have cam and pincer impingements (bone spurs) which we will have to shave down. Most times we recommend PT for a period of time depending on how long someone has been in pain and how severe the tear is but considering you’ve been in a pretty significant amount of pain for a long time, you’re going to need surgery. (without so much as a pause) So it will be about an hour and a half surgery, three weeks on crutches, non-weight bearing then a slow progression off crutches…” That’s where I stopped listening as I realized how real this was. I had never had surgery and I had to fight back tears as I thought about how I was going to be able to work, to get up a 4th floor walk up, to do laundry, to grocery shop, to clean my house!

“Do you have any questions?”

It took me a minute but I managed a little peep of a no. I could barely breathe. He gave me the number to the receptionist that would schedule my surgery and told me to call the next day. Next step, call my parents and let them know the plan. I was shaking as I told my mom. Now let me tell you that when I say I have the best parents in the world, I truly have the best parents in the world. Any time I’ve needed something, any time I’ve needed help, they were on the front line ready to go. My mom calmed me down as she said everything would be fine and that they would help me financially which would consist of twice weekly PT visits for 5 weeks and once a week for another 6 weeks and taking cabs at least twice a day, sometimes 4, for what I thought would only be 3 weeks but turned into about 8 weeks.

When I got off the phone with her I thought back to what I had seen at the hospital and I realized that my problem wasn’t all that bad and by the time I got back to work I was actually excited about having to have hip surgery because it meant that the pain I was feeling in my hip all the time would be fixed and I could get on with my life and get back to my workouts that kept me sane.

Workouts. Yeah. The minute I found out I had to have surgery, it was as if my hip started to deteriorate at a rapid rate. Maybe it was the Crossfit or maybe it was the fact I was still trying to workout the way I was working out my entire life. Within 2 weeks I had to quit Crossfit, which almost made me cry, and tone down my workouts in the gym. When I had called to schedule my surgery I expected to get in within the month. Sorry Kara. What’s an extra month matter anyway? Well, a lot when you can’t do the one thing that kept you sane for years. Two months of waiting. (Not that bad looking back on it because boy did I live it up! Malbec anyone?)

All I can say at this point is I had no idea for the ride I was in for, the journey, the learning, the humbling that would take place over the next year from not only the surgery but from life in general. I’ve said it before and I’ll say it again. I am so thankful I had that surgery because it not only brought me back down to earth, but it gave me perspective that I never would have gained without that surgery. And, as I’ve said in prior posts, it forced me to relearn what is important in life.

A year later my little old right hip is doing wonderfully, she’s not quite back at 100% but she’s a lot better off than she was a year ago.

Oh and I will say I never did commit to the arm crank machine which is weird considering how excited I seemed to be doing it one year ago today.