I got the Reebok job!!! I found out while I was training a client so I had to maintain my composure but inside I was freeeeaking out!! I still am actually; half peeing my pants and wanting to run around my apartment and leap for joy…but I wouldn’t make it very far since this apartment isn’t a penthouse suit or anything and I might break my hip. For most models, this would be NBD (no big deal, obvi) but for me its a VBFD (very big f****** deal)! I haven’t done much modeling other than 4 shoots for Cybex (if you don’t know what Cybex is, you are living under a rock and we cannot be friends), 1 for Via Prive (a boston based clothing company for CrossFit – http://www.viaprive.com), 1 for Reebok (no explanation needed) and an infomercial for Gorilla Gym (you seriously need to buy one of these – http://gorilla-gym.com)….actually now that I write it, it seems like a little more than not much. Modeling is so much fun! At least the stuff I have done…hoping it stays that way! But let’s recap to the casting call… 🙂

Strip down? Geesh, no modesty in this modeling biz. (It didn’t REALLY go like that, just more fun that way)

I arrive at the Reebok Headquarters in Canton, MA at 9 am on Wednesday and OF COURSE they have Dunkin Donuts there giving out free Munchkins, coffee and lattes. Now I’m not usually one for the Dunk’s but when I get that craving I go right for those little Munchkin balls of joy because they just have a big ‘ol party in my mouth, especially if you get them first thing in the morning. 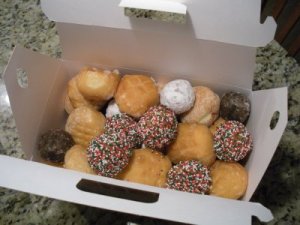 Hello, Heaven. Do you remember when they actually made the donuts in house? Ah the good old days. Either way these things are phenomenal.

So I’m sitting in the main lobby waiting to be called for the casting, just staring at all that saturated fat, sugar and caffeine and in my own dream world where I could jump into a pile of Munchkins and devour every last one and then finish it with a latte. The two male models that were there with joke about grabbing some after the casting but I think I was the only one that was seriously considering it. Next thing I know we get called upstairs. I was actually out of breath when I got to the top of the stairs and my legs were burning. Clearly I am a personal trainer. I thought, “Maybe that burned off a Munchkin.” I was basically coming up with any way I could to justify having one.

They bring us to a room with no windows, thank the heavens. “Did you guys wear what we asked you to wear under those clothes?” Yup. Mind you this was a bikini for girls and boxer briefs for boys. Game time people. Thank goodness I am mildly comfortable in my skin (ever since accepting all my beautiful imperfections 🙂 ) because we stripped down right there, in front of each other. Now I am a relatively modest person in the way I dress so to strip down in front of people I had just met was a little weird. If we were at a pool or the beach and I was tan and lean, I would be all for it, but this is winter in a random room at Reebok, I am not that lean and I am a ghost. Oh how my little imperfections that I am so proud of were so quickly revealed. So to ease the awkwardness I casually say, “Ooooaaaa I get to be half naked with two hotties” and thankfully, I got a laugh out of everyone.

So being half naked, I am simply trying to flex my abs so that it looks like I still have that 6 pack and not a pooch…I think the boys were doing the same. 🙂 One of the hardest parts about casting calls is that you have ONE chance to strike a pose that they are going to like enough to pick you for the shoot. It all just happens so fast that I half black out every time, not knowing what is going on. My first few castings I was shocked at how quickly they get you in and out. I have finally figured out that I need to spend time posing in front of the mirror to figure out my angles. Just picture me in front of my mirror making every imaginable face, matching it to my pose, my angle, my body, flexing, blahhhh. So much to think about. Picking up your chin a quarter of an inch can make the photo look COMPLETELY different. Clearly I am still very new at all of this. This is as good as it gets right now – clearly I am most comfortable post workout after sweating my face off…

Anyways, I watch the two boys strike their pose (gosh I wish I had taken a pic), looking all hot and stuff and then it is my turn. Flex the abs, relax the shoulders, smile and hold the piece of paper that says my name. I giggled and didn’t know at what point she took the picture – clearly I blacked out again or was extremely distracted, not sure which was actually the case and therefore I have no idea how that photo looked. Clearly I need some more time in front of that mirror in my kitchen and more time in front of the camera. Meanwhile, I am still thinking about those Munchkins. They actually made a joke about going and getting some Dunks…”Oh hell yeah I am going to get some.” The response from the people from Reebok….pure shock. “Please don’t do that. This is an underwear shoot…an UNDERWEAR shoot.” I’m juuuuuuust kidding (am I though?).

I reluctantly walk down the stairs, past the free Dunks and Munchkins and hop into my Zipcar that I almost crashed about 15 times because I never drive. And then it hits me! I bought a vegan blueberry scone from Boston Common Coffee in the North End! OMG! I stare at it and it stares right back. I take one small bite because I had not eaten in hours. The flood of amazingness that hit my taste buds was unbearable. I had to throw the damn thing in the back of the car so that I would not devour it but apparently the whole out of sight out of mind thing doesn’t work for me because the minute I got home, I took a few more bites/ate mostly all of it. Oops. BAD MODEL! But really I was just thinking about my imperfections and keeping those imperfect, so it was totally justified. I felt a little better about myself after my workout and my post workout shake… 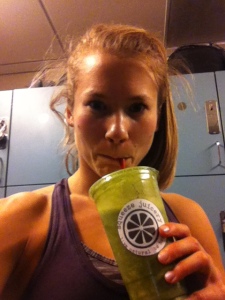 BodyTech whey chocolate, kale, spinach, 1/2 a nanner and ginger. Mmmm. If you are near the Franklin Street Equinox in Boston you should: A) come visit me B) train with me and C) have them make you this shake.

Gosh life is good. I need one of those shirts. “Happiness is like peeing in your pants. Everyone can see it but only you can feel its warmth.” Giggling so hard that I just might feel it’s warmth! SO EXCITED!!!! AHHHHHHHH!!!! All smiles here!!!

One thought on “Time to do the Undie Dance!”