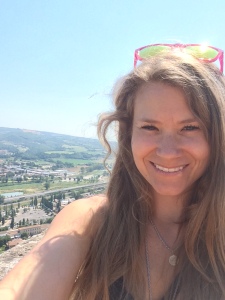 This place, OH MAN THIS PLACE. I started to create somewhat of an itinerary thinking I would go to Rome but I just couldnt’t get enough of Orvieto. There was plenty to do here. And the history of the city was just fascinating to me. There was and is a legitimate underground city. Due to the fact that Orvieto is on a cliff and there was no access to water waaaaaay back in the day, wells were built in order to retrieve water from waaaaaaay underground. Now, the wells that were in the underground caves were pretty cool but then I ventured into this one… 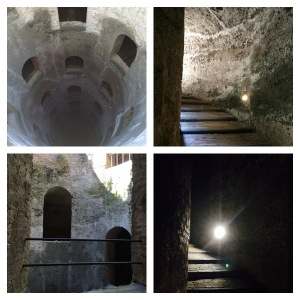 To give you a little bit of an idea if you don’t want to read about it at this website that I borrowed it from: http://www.italyguides.it/en/umbria/orvieto/pozzo-di-san-patrizio

“First, an extraordinary fact about the ancient town of Orvieto is that it did not have a constant supply of fresh water. It was an impressive fortress-city in central Italy built upon a ridge formation. Orvieto’s location on top of a bluff of sheer volcanic rock served as a defensive site and papal refuge in ancient times.”

“Fearing troops might lay siege to the Orvieto, the pope commissioned architect-engineer, Antonio da Sangallo the Younger to build an underground well system. The future Pozzo di San Patrizio would provide Orvieto with an adequate water supply in case the pope could not travel outside its fortress walls to return to Rome.”

“The bold scheme of St. Patrick Well consists of a circular shaft 200 feet deep and 45 feet wide lighted by 72-arched windows cut into the Pozzo di San Patrizio. Two spiral staircases descend from opposing doors of the shaft to access and transport water.”

And HOLY MOLY was it a tiring hike back up because yes, I went to the bottom of the 200 foot well. The two spiral staircases were pretty cool simply because they were completely separate. I couldn’t really grasp the idea then and still can’t now. 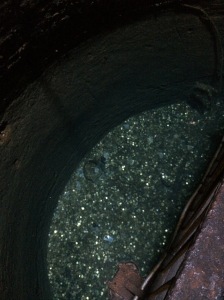 By the time I climbed back up the spiral staircase I was huffing and puffing and sweating and SERIOUSLY needed something to cool me down. A glass of wine and water later and I am back on to my next underground experience. 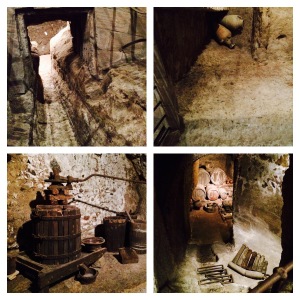 I visited this cave on my own so that being said, I didn’t really get the full history and explanation especially because it is a much more complex and MUCH cooler cave than the one I visited the day prior. But to be underground and see what they were able to construct without modern day tools is just fascinating to me. Not only here but with the Pozzo di San Patrizio. It makes us all look pretty lazy if you ask me. They adapted to their environment and thrived (and left behind some pretty sick artifacts). Walking around this cave alone was pretty creepy but at the same time I was walking through history. It was on the verge of being spiritual, as if there was a presence there that I could feel with an intensity that cannot be described. You have to experience it to truly understand it.

When I came back up, the little old man that I am assuming was the owner or manager took my hands and walked me to this…

Yeah, that’s the cave below. Pretty badass. Then he told me I was Bellissima which put a little smile on my face. Grazie! 🙂

After all this exploring and my daily run/walk through Orvieto and the surrounding area, I decided to hit up a new spot for my nightly pre-dinner glass of wine at Caffe Costadoro. It had a lovely seating area on a small square just off the Corso and when I sat down with my glass of Orvieto Classico, I was pleasantly surprised with a free hor d’oeuvre and a wink from the rather cute waiter. Now I didn’t want to eat all of it and spoil my dinner but it happened anyways and therefore it became my dinner!

After two mini sandwiches with prosciutto and salami (of course), 3 bruschetta (which by the way, the “ch” is NOT pronounced like “sh”, it’s a “k”. I learned that the way most Americans say it means lady of the night in Italian. Not exactly a good thing when you’re asking for it to eat…) with 3 different spreads that I still do not know what they were, and 2 glasses of white wine, I decided to indulge in gelato from the store that was said to have the best gelato in the region. Boy, was it good but the measly two scoops I was given just weren’t enough so what did I do once I got closer to the main square?

Yup. Two separate gelato purchases within 5 minutes of each other. Heaven. On. Earth. I even splurged a little and got the whipped cream. When in Italy, right?? But to be honest I felt a little guilty, but not full oddly enough, so I decided to go for a walk and this is when I found the most beautiful views I saw my entire trip.

Looking back onto the medieval section of the city

The cliffs were absolutely amazing

Not a sound. No cars. No construction. No people. Just me and peaceful quiet.

When I picture heaven, this is what it looks like.

Thank God I went for that walk.